AG08 session I'm Busy Enough ... What Do I Need a Second Life For? by Alan Levine 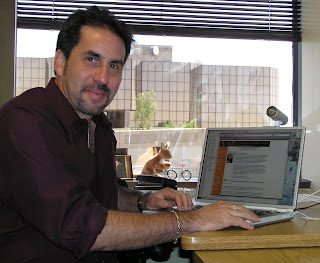 (For the live blogging info look below the AG08 synopsis)

the presentation that he gave

The Second Life wiki of the NMC campus

Second Life, and virtual worlds in general, are high on the hype curve this year. While it’s easy to point fingers at the well-known failed corporate attempts to use these environments, the sheer number of people actively involved, the time they spend in virtual worlds, and the intense nature of the experience suggest it has a place for e-Learning. Second Life is an easy target for shoot-from-the-hip media articles, and it’s proponents often come off as religious zealots. This speaker is an open-minded skeptic, and unsure if virtual worlds will ever even approach the ubiquity of the Web. At the same time, his experiences are that this is a compelling environment for role play, simulation, creative expression, extending a professional network, and developing new ideas.

Session participants will share the experiences and lessons learned from the New Media Consortium's activities in Second Life, starting in January 2006 before the media caught on to this technology. NMC has run a series of live events, including two full-fledged conferences (with paid attendance); has created a business and development arm, and is currently the largest Second Life education landowner (50+ sims).

In this session, you will learn:

why do virtual worlds grow in this day and age?
Alan is a dog (in SL he adds).

FAS tries to list the growing landscape of virtual worlds

gartner looks at the research on virtual worlds

In second life 250 lindens = 1 dollar, linden is the currency, you can buy it with your credit card. So Second Life (SL) you can buy and sell things. You can design things, build... just like real life. Building is not for everybody, but there are free classes, there is also a scripting language to make things interactive.

10% of the people represent themselves as a different gender. You can change however or to whoever you feel like (aliens, glowing cubes, cats...)
But unfortunately you still need to choose a gender when you register for SL, which is a pity.

(Alan shows a fun collage - must be in his slideshare thing)

SL is about rich experiences by roaming the world where you interact with other people, it is SOCIAL. (mentions a couple of SL

It is easy to take podshots at SL, as long as you did not investigate SL in (virtual) person.

Henry Jenkins from MIT on fanfiction (not sure about the word, need to look up) he turned it around and asked where the anti-SL'rs found the time to podshot it.

it is visceral: you react in a very real and human way


It is demeaning to say why do people waste their time with it. It is good to be skeptical, but you must keep thinking.

some skeptical thoughts:
the graphics are okay, but not up to gaming standards.
gamers think: there is nothing to do (okay, not like game scenario's)
fearful people do not like the learning curve, the technology keeps people away, you need strong graphic cards.
How to be functional: clothing, walking, flying... you learn and evolve by doing
(humour: too weird! I was chased by a giant penis)
How do I make money

The Horizon report (since 2004) look at the landscape of emerging technologies; things that will become commonly used in the educational sphere (f.e. serious games...)

In Jan 2006 they developed a SL environment (in the beginning nobody came) so they started asking people, started art classes, provided meetings... this got the community going.

International space center in SL is a place to visit!!

If people join a community and follow the same event, people begin to share their experience and knowledge. So it is really social.

Question from the audience: where do you find out about conferences etcetera to get to know SL?
if you are in the educational realm there are a couple of SL options, there is a SL events calendar (contact him to learn about it).

If you do not do anything in SL your avatar starts doing things automatically (falling a sleep).

We go to virtual hallucinations (a simulation of what it is if you have hallucinations or are a schizofrenic, it is based on real research)
(I would record this, but my camera battery gave up)
SL is also very creative and experiential.

(another avatar is just flying in and looking at cogdog - funny)

Quackforms (not sure about the writing) is mentioned by Alan, it is a controlled environment, firewalled and everything. So you can share all your desktop activities. This is new technology and it is going to grow. Virtual worlds are really the thing to follow.

Conclusion: this was a very demo oriented presentation of SL and I really liked it. I - just like many other people apparently - joined SL just 2 and then put it aside. But thanks to a couple of educational friends and this presentation I want to go back in and really get active (I mean that in a passive way). And Alan has a lot of humour, so that makes it very pleasant as well. Mmm, I am definitely going to visit the nmc-landscape.
Posted by Inge (Ignatia) de Waard