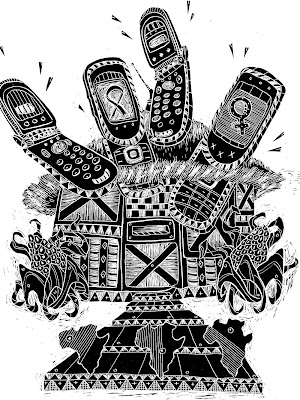 Mobile learning, South-Africa, case study.... this is a perfect combination to build an interesting paper. The paper I summarize here is part of a mobile learning book edited by Mohamed Ally and I wrote about it in an earlier post here.
Lately I have been rummaging through a lot of papers. Some of them are interesting, but this one is truly inspiring, so I decided to put a summary of the article in my blog. Hopefully some of you will get motivated to go through it, I think it is worthwhile because the article clearly describes the steps that are taken to come to the case study it describes. It is referenced quite a lot, because this review was part of an assignment. If you are into mobile learning research, this is a good paper to read through.

In this article Jon Gregson and Dolf Jordaan (2009) focused on the challenges and opportunities of a two year mobile learning (m-learning) project started in October 2005. The project was based in the Southern African Development Community (SADC) region. The project was embedded in the Wye Distance Learning Program (DLP) of the Imperial College in London, United Kingdom, and has been developed in close collaboration with the University of Pretoria (UP) in South-Africa. The target population consisted of postgraduate distance learning students from the SADC region registered in the DLP. The case study covered an investigation of the context and potential value added of m-learning, considering the pedagogic and practical models being used by the DLP. The project also looked at the educational needs of the students.

Gregson and Jordaan (2009) delved into the current status of eLearning in the SADC region within the DLP program design, and delivered a literary review of mobile projects in a Southern African context. The steps followed in the design and the implementation of the project, were also shared. The authors described the two phases that were covered. In the initial phase four students were identified and became involved in the planning of the project. The second, pilot phase involved a group of 20 students testing out course materials, activities and tutoring approaches that were designed for the mobile phone. The selection procedure and the reasons behind these student selection procedures were described in the article.

The authors highlighted the major considerations and challenges: communication, access and participation, tutoring support to students in diverse locations, the usability of learning resources for students who are mobile, and access to content and programme materials.

An overview of the SADC baseline survey was given: ICT access, rating for current eLearning support, quality of support and access, and Online Learning Environment (OLE) access. Insights into the context of the regions were obtained by interviewing the four students of the initial phase. Gregson and Jordaan (2009) examined mobile coverage maps, future telecommunication coverage plans, and student relationship with the student’s local infrastructure. The preliminary activities of the students were covered: sms with the project team, audio and video recordings, picture taking, and communicating with peers. The m-learning support for the two course modules that were trialed in the project was also covered. The authors specifically drew on the integration of constructivist, situated, collaborative, and informal learning theories and activities as the pedagogical model of the project.

After describing the project in clear detail, Gregson and Jordaan (2009) reflected on the technical design decisions that the project team made. They concluded with possible areas for further research.

I really liked the article as it clearly described the decisions they made along the way. It also made sense in the longterm, from a historical archive point of view.

For those interested in the complete reference:
Gregson, J. & Jordaan, D. (2009). Exploring the challenges and opportunities of m-learning within an international distance education programme. In M. Ally (Ed), Mobile learning: Transforming the delivery of education and training (pp. 215–246). Athabasca, BC: Athabasca University.

And I got it from the internet here.
Posted by Inge (Ignatia) de Waard

CCK09: does Connectivism want to change the world?

The last couple of months I have been thinking more then I am writing. I am still thinking. In fact the more I think, the dumber I get and I start to see it as fact. So less writing is done. My network is amazing, however and so I keep connecting them if that seems like a good idea. My network consists of people trying to improve the world, meaning reduce conflicts, access to health facilities, access to education, etcetera. A lot of people in my network are scientists with a vision to improve the world and make it a better place to live in, with quality of life for all (in a variety of forms they define it).

Although still a bit reluctant to write, seeing as I feel in a cognitive slow period of life, this post had to be written. Especially after reading Stephen Downes’ article on Group vs Networks: the class struggle continues. Some quotes from the article:

“It's hard to believe that something like freedom of speech is a radical concept, but there it is. In their own ways, a person in a network should be able to send their message any way they want in their own language using their own computer encoding, using their Macintosh computers, using standards that are non-standards.”

“In networks we have communities of practices where a ‘community' is defined as collections of individuals that exchange messages and ideas back and forth without being impeded. Copyright, trademarks, proprietary software, all of these things are barriers for the communication of thought and ideas. If you allow that using content, images, text, video is a way of speaking to each other, then copyright, trademark, all these things are ways of locking down our speech, saying, "I own the word such and such and you can't use it."

“You can't build a society with walls. …In the longer term we have to do something more imaginative than blocking this technology. We need to live and teach and learn where the students live and teach and learn. That means that we have to stop blocking to their spaces and go to their spaces. So we explore their world. But, you know, there's the age-old danger of explorers that when we go to their world, we're going to want to colonize it. And we're going to want to make them like us. And we're going to want to take them from their mountains and put them in rooms and put walls around them and put locks on their doors and say, "This is civilization."

While picking up parts of the CCK08 last year, I found it enlightening and in sync with some of my world beliefs. This year I enrolled, but I was not actively producing anything. However, I love to lurk and I learn a lot from it which suits my current state of mind. To me Connectivism is more related to Critical Social Science (CSS) then Interpretive Social Science (ISS). This idea matters to me, because I had the feeling that Connectivism had or has an activist agenda incorporated as well. But than, maybe a tainted what I learned or I tainted it in order for Connectivism to suite my preferred worldview.

For those not familiar with the distinction between Critical Social Science and Interpretative Social Science, I give a short list of features for each, as cited by Neuman (2006) in the book ‘Social Science Methods: qualitative and quantitative approaches’, for the CSS frame see p. 102, for the ISS see p. 94.

From all these points, I love this one from CSS the best: Social reality and the study of it necessarily contain a moral-political dimension, and moral-political positions are unequal in advancing human freedom and empowerment. For I feel that fighting to keep communications open and accessible for all is an absolute priority, also in education. But even now, even at the most liberal of educational institutions (university) some of these educational rights are challenged, blocked. So is it not the responsibility of the scientist to actively participate in opening up or keeping the door open to enable all of us interested to use these educational tools?

Why is it important to me to know whether Connectivism is either or, or both? Because it matters to me what a theory does and what its goal is. To me science has a function to serve society, to make all of our lives better.

Sorry for the lengthy post, I should probably do some more thinking.

Do you think Connectivism or its researchers should actively take part in society?