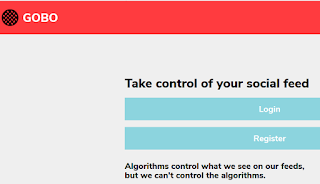 Anyone interested in data and ethics has been reading a gazillion of articles the last week. So, time to recap the big results coming out of the Cambridge Analytica files: correlations have their scientific merits (argh!), humans can be profiled in just 12 likes (honestly, this is how diverse we all are?!), anything measured can be used against us (a Cobra), and teachers around the globe seem more ethical than scientists (my partner says it’s true, I say it isn’t). Well... manipulation is part of history, I guess... but still!

First of all, a nice MIT research project on “How to manipulate Facebook andTwitter instead of letting them manipulate you’ (yes, it is a timely title 😊 ) mentioned in MIT’s Technology Review. The project let’s you – the user – manipulate algorithms emphorced on you by Twitter and Facebook (I like it, activism from within the system). This initiative is called GOBO (if you want to jump right in, you can login for this project here) and it is a prject from researchers at the MIT Media Lab’s Center for CivicMedia. It has an interesting parallel referring to Cambridge Analytica approach, BUT in this case it is truly scientific, and they ensure deleting ANY and EVERY data collected once they have results on how you would like to see algorithms adjusted. So take back the algorithms of Twitter and Facebook with GOBO.

I am just resurfacing after the Cambridge Analytica fraud (I call it fraud as they have been anything but ethical in their so called scientific data gathering: no informed consent, data gathered and not anonymised before using it for 3 parties, data not deleted after a project was finished….).


Correlations are used successfully? Argh!! For years, many educationalists and researchers emphasize that correlation is no replacement for causality. Causality is the basis of all strong research. It is clear that education and correlation aren’t a love story. We- as educators and researchers - know and understand the importance of context, of language use, of how personal each of our learning journeys takes form. In a sense, we should know better then to construct a test that puts everyone in the same batch, and then believe in it to state those things that we think sound nice (however tempting that type of action is... I mean, saves time on reflecting, nuancing, evaluating... and all these time-staking stuff) … but Cambridge Analytica got away with it. PISA was/is another such example. It even manages to enter the OECD report (https://www.oecd.org/education/) as core element of proof leading to rigorous outcomes. PISA test is an in correlation resulting test. A nice list of educationalists that argued against using PISA here. With the Cambridge Analytica files, the correlation monster pops up once again … AND it is now used ‘successfully’ to blind-side people and to get them to doubt their political choices just enough to swing their vote. So, correlations can be used quite viciously for some of the time.

Forget complex human traits: humans can be profiled in just 12 likes! And all of this comes from research (great paper on how it was set up here, Schwartz , Eichstaedt, Kern, Durzynski, Ramones, Agrawal, Shah, Kosinski,Stillwell, Seligman and Ungar (2013) . Well… how difficult is becomes to state (and belief) that humanity is truly diverse! Admittedly, the Big Five Traits also distil human diversity into just 5 personality traits, but still… being profiled on 12 likes… How individual are we, if that is all it takes to cast each one of us in a box that subsequently can be manipulated from that moment onward? It becomes quite difficult to see humans as complex beings when I take that into account… but we are social, at least that is now proven once again.

Anything measured can be used against us. One of the most interesting blogposts I have read, is an older one from MikeTaylor, stating that as soon as you try to measure how well people are doing, they will switch to optimising for whatever you’re measuring, rather than putting their best efforts into actually doing good work, and this optimising is always at risk of being distorted, even corrupted (Mike refers to Goodhart’s law, Campbell’s law and the Cobra effect – great read).

And teachers around the world have more ethical sense than scientists that do not teach… well it is a discussion, my partner says that fact is well known, I say scientists who do not teach can be ethical as well…. Those darn Cambridge Analytical (and derivates) people! (good example of this is Autumm Caines , she wrote on Platform literacy refering to her encounter with Cambridge Analytica to get all her data from them all the way back in February 2017 (which was a hastle!). Yes, she got active one year before this whole event blew up into an international scandal. Autumm keeps ethics high!
Posted by Inge (Ignatia) de Waard No comments: