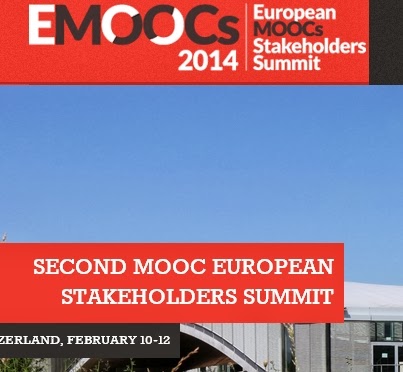 As this first day at #eMOOC2014 day passes, I get the feeling that it really will not be possible to change the way education is heading: increasing the digital divide, replicating existing power imbalances. Dark thoughts during a really nice conference. The reason for this dark thoughts is due to some facts: e.g. the video recording studio that Jermann talked about, if the content production is supported by such a big HR team, little universities/non-profits… cannot beat those uni's content creation. Content creation is a content avalanche coming from those institutes that can produce, inundating (involuntarily) those who cannot. (metaphor: African companies will not build Swiss buildings, for these buildings have been build, the other way round does happen, think Chinese companies building in South Africa. So what is already there is the keeper). This is a life reflection blog, so sorry if certain trains of thought are open ended, as speakers keep talking as I reflect.

Although the inspiring opening speech from Pierre Dillenbourg was fun and invigorating, his belief in EU-MOOC is lost in my equality seeking mind. There is no way that any university with lack of HR can produce content at a rate that big money HigherEd can. There is no higher ed change, there is just a capital shift at most, but the same content, the same gatekeepers ensure the same doctrines and facts.

After which a president of EPFL started to talk, Patrick Aebischer. He gives his view on the MOOCs produced at EPFL. He rightfully starts from online learning, and the evolution to current MOOC. Online learning institutes have indeed paved the way for current MOOC options. One of the biggest European problems at the moment is linked to the reality of the divided states in the EU, as each country starts their own platform, which is hindering collaborative growth. And some EU universities have joined US MOOC platforms, so there is a real shift in universities in terms of region.

Let me get back to the xMOOC cMOOC discussion… cMOOC are being run over by xMOOC. Which is again an example of the big taking over the little, or the scalable norm overtaking the local, tailored option. History (in this case history in HigherEd educational change) is rewritten at an increased rate, which makes it also very interesting, I must admit.

Another interesting number shared was the fact that a French course gets only 10% of participants compared to a similar English course. So if scale has an impact on budget, hitting the main market segment becomes ever more important.

Continued education or lifelong learning is increasingly important, and this means courses followed need to be aligned with professional demands. Coming back at the success rates of MOOC, there is again the link to certification given during the talk, which is not necessarily linked to the personal need of the MOOC participant for her/his professional development (it might just be one part of a course that feels useful). This need or not for certification is a returning chant during the conference. I think it depends on where you are coming from, where you want to go, and what you need as a learner to proceed to new professional horizons. If you do not have a degree, certification might be very important (for the self, as well as for the career), whereas a professionally settled learner might not feel the need to pursue certification.

Looking at continental regions: “Africa is trying to catch up with MOOC courses”, which makes me sigh. It should be African courses which are provided to African students, for so many reasons (identity, ownership, localisation). Not surprisingly EPFL saw the potential of producing French MOOC courses, as it is a specific regions currently under served by MOOCs (French regions). And of course with the best intentions, but in a way any collaboration or educational support should be aimed at providing autonomy. By the people, for the people in combination with the personal is political.

Patrick also mentioned a remark coming from Northern face-to-face students “MOOCs are good support material. However they do not offer a good alternative for ex-cathedra courses”. So is this a reality? For if it is, any amount of MOOCs will still only deliver an alternative for non face-to-face or blended learning students, and result in an increased digital divide for those not being able to add any form of blended or face-to-face learning to their self-constructed or provided curriculum.

Not everything is dark. For EPFL has set up a collaboration which looks at priority themes for Africa (water, energy, nutrition, health…), but again although support is given … the fact that content IS created and disseminated, puts other regions that try to play catch up at the end of the line.

Students need credits or certification. For MOOCs to be included to the local curricula, academic regulations need to be amended. Collaboration across universities from different regions is possible but is said to be challenging due to the administration, and again I cannot help but think that if collaboration is offered in terms of the power beholder, it inevitably has the mark of that power, the mark of that content embedded in what is being created.

Another revolution is the learning data, but these data are also coming more from Northern sphere, so results will provide guidelines fitting those types of learners (or at least more than the others), as reality is in the eye of the beholder.

But why do I care? That is my question. Why would I even care whether education for all is really achieved or not? For a global world is inevitable. Power will always make the rules, put down the laws… so why do I care and do I want to ‘preserve’ the drive for equality which is – at the end of the road – impossible. Conquering territory is a human fact, diversity seems to be an illusion, and only provides a map of that which will dissolve giving another few decades.  How can I ever talk tomorrow about including vulnerable learners?
Posted by Inge (Ignatia) de Waard