Free report on #teaching to reach education for all

Reaching education for all has been on the lips of many developing regions and their policy makers, but the pace of that race is slow. As a distance learning researcher and specifically into mobile learning, I often support technology as an important factor to reach learners all around the globe. That fact gets disputed regularly at home as my partner is a teacher who pulls my feet back on the ground saying: in order to reach all students, you need to support and talk to all students. She is right, the only way to reach everyone and ensure education for all is to invest in teachers. Technology is only an instrument, and believing technology will help us all is as silly as saying that when everyone would have a spoon, we would all be eating. Without a fruitful soil, without teachers, without available content, any progress will only happen at low speed.

UNESCO is right on that train of thought and has recently published an extensive report entitled: Teaching and learning: achieving quality for all. I must admit I like the addition of 'quality' to the 'education for all' concept. The report is available in two formats: a 50 page summary (available in English | French | Spanish | Arabic | Russian |Chinese | Hindi | Portuguese) highlighting findings and strategies, and the full report (just under 500 pages as an  English Full Report | French | Spanish (pdf.s)) for all that really want to dig in the details.

The report is divided into three parts. Part 1 provides an update of progress towards the six EFA goals. The second part presents clear evidence that progress in education is vital for achieving development goals after 2015. Part 3 puts the spotlight on the importance of implementing strong policies to unlock the potential of teachers so as to support them in overcoming the global learning crisis.

The report summary highlights some urgent goals that need to be obtained and reading the shortlist certainly got me thinking:

The one fact that strikes me the most is the lack of progress in adult literacy. It is all good and well to advocate free online courses, but if literacy is not reached, no matter what type of content we put out there it will not engage all learners (unless we make it non-textual and available in local languages, which would be a real bonus for all). And literacy efforts demand intense teacher and learner efforts as well (time, money restraints). 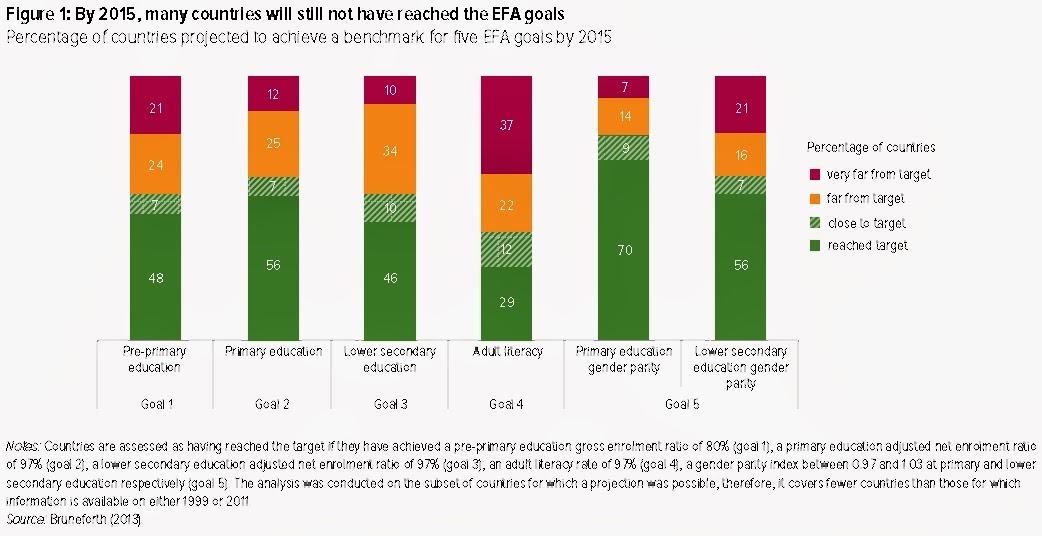