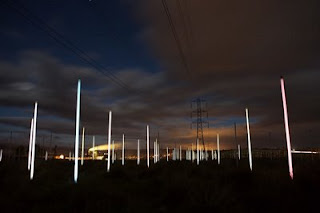 It's a case of the optimist versus the pessimist view on life. During the latest Intel Developer Forum in San Francisco, California, one of the topics in the visionary keynote was wireless power. Justine Rattner, Intel's vice president, demonstrated a Wireless Resonant Energy Link (WREL) to power a 60-watt light bulb without the use of a plug or wire of any kind, which is more than is needed for a typical laptop. For this technology Intel said they were using principles developed by MIT scientists developed by MIT scientists.

"WREL technology employs strongly coupled resonators, a principle similar to the way a trained singer can shatter a glass using her voice, Intel said. At the receiving resonator's natural frequency, energy is absorbed efficiently, just as a glass absorbs acoustic energy at its natural frequency. With this technology enabled in a laptop, for example, batteries could be recharged when the laptop gets within several feet of the transmit resonator, the company explained." as the TG-daily reported.

The optimist in me definitely agrees that 'The wireless power supplier will be a great invention! '

But than again the pessimist in me is quick enough to get me focused on possible dangers that need to be taken into account. What about the radiation of these wireless power solutions? I remember the great works of art Richard Box set-up using nothing more than stand-alone, non-connected light tubes, spread underneath high voltage transmission towers. The effect was amazing light without needing to connect the lights to an electricity plug (see the photo: 'shake pole by Richard Box). It is clear some radiation is filling the air surrounding these high voltage towers.

And while reading the article something else came to mind: is the radiation that is used in this future wireless power supply using the same frequency as microwaves and cell-phone radiation? If anybody knows this, feel free to fill me in.

Because if this is indeed the case, those radiated microwaves could effect human health. I know a lot of people put question marks on the research that is focusing on microwaves from cell-phones and the possible effects they can have on health, but I always try to be safe. If simple measures (hands free set, radiation free isolated homes...) can make sure I do not have to worry about whether these waves do have an effect, I simply apply these safe guidelines.

If you are interested in reading up on radiation from cell-phones and human health, feel free to have a look in the publication list of the computer science researcher Mikko Ahonen from the University of Tampere, Finland. Mikko Ahonen also has a great blog on open innovation, creativity and technology.

Why are the optimist and the pessimist seldomly agreeing on the same thing?

And thanks to great colleague Carlos Kiyan for getting me on to Intel's wireless power vision.
Posted by Inge (Ignatia) de Waard