This is just up my alley! A MOOC on spacebooks! Is it Art, is it Sci-Fi, is it History, is it Literature?....
It is all of the above!! 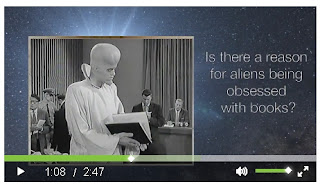 The full title of this MOOC organised by the Zurich University is: Spacebooks. An Introduction To Extraterrestrial Literature: Learn about how our imagination of the universe and its inhabitants was shaped by literature throughout the last 400 years.

And all the lectures are designed to be self-contained. The essential excerpts of the main sources will be provided, if not available on the internet. So I can just pick and choose, wonderful.


Since the invention of the telescope in 1608, outer space has been turned into an abode, a place scientific speculation and literary imagination could thrive on simultaneously. The human mind was sent on a journey to visit other planets – and time after time it returned from there with breathtaking news, disturbing images or philosophical insight. And, of course, with a lot of questions: Why funeral customs on the Moon include cannibalism and orgies? Is it true that the people of Mars do live according to higher moral standards than we do? And where does this weird alien obsession with terrestrial paper actually come from?These are some of the questions we will be addressing within this course. Moreover, we will watch the birth of the alien reader, we will explore the logics of space invasion and the history of space colonies well. We will examine the inventory of extraterrestrial libraries and survey the competing projects of galactic encyclopedias. Next to well-known authors as Kepler, Cyrano de Bergerac, Stapledon or Lem, you will also be introduced to neglected and forgotten texts. Finally, we might even understand how literature itself was transformed by this journey throughout the universe – and how it finally became a true interstellar medium.

And... there is a special soundtrack! The soundtrack to this ET-MOOC will be provided by Swiss artists Bit-Tuner and Darkspace. Oh, how I love Art and Innovation!
Posted by Inge (Ignatia) de Waard