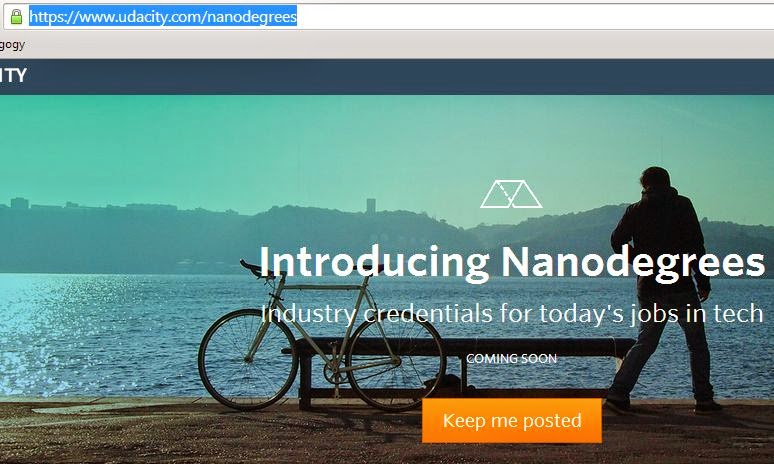 The new Udacity and AT&T initiative rolling out nanodegrees for people who follow specific MOOC or online courses in general has a logical and nice ring to it. The idea is simple: for all learners following a course successfully (= as indicated by the institute/corporation designing the course and its interactions/assignments/tasks), a nanodegree can be earned that illustrate immediate job skills and knowledge. This earning does cost: 200 $ per month (courses on average 6 - 12 months), but it is much cheaper then a college degree. As such Udacity goes for the corporate MOOC creation which (in part) addresses training people for specific jobs through MOOC. Smart move of course from Udacity to corner the more entrepreneurial need job/training market. And although other MOOC providers, such as Coursera do have similar tracks (i.e. specializations), Udacity seems to be a fore runner for this type of MOOCs.

Less discrimination?
A definite bonus of this approach is that companies indicate niches in their workforce, resulting in courses that will indeed develop a capable learner into a potential professional for the job. The fact that the course offered is right on target of the job, also saves time (and costs) for all involved. And, the best learners come out of it based on their actual delivery, so selection based on color, race, ability might fade as a result (yes, utopia). And the fact that nanodegrees are also linked with scholarships to non-profit organizations is a bonus as well. It feels like really good news. In Europe you have entrepreneurial schools popping up, who listen to the industry to find out were there is a gap in the job market and offer courses to alleviate these gaps (iMinds academy is one).

Jobs that will not make it into the future?
So I was hopeful, good initiative to get people into jobs. But then my critical mind set in and suggested some possible downsides.
I can see how many people (increased employment) might enter a contest to get jobs: the best MOOC learners get the position. And those who would go for these jobs - when reading the articles on the nanodegree from NY Times, seem to be the less financially secure. This means there is another divide and conquer tactic being set loose on an already sensitive population. And it would seem to me, that if a job can be learned in a fixed amount of time, it will be one of those jobs that vanish in the near future due to automation, Harold Jarche wrote on the subject of automation on several occasions (but in spite of this critique my other positive brain tells me: yes, but in the meantime people will gain some money in the process, that is good, any income enhances self-esteem, increases economic stability, will lift others as well).

The idea fits in with what Mozilla started using open badges to allow informal certification to be offered when completing certain learning tasks or paths. But then again open badges can be provided for free, and tailored to any need or vision.

Industrial era training approach?
While thinking it over and over again, I cannot seem to shake the feeling that the concept of nanodegree is much more a training following the industrial era (but I can completely miss the ball here, as the courses are still being constructed and might well be creative in their pedagogical approach), but it is the teacher (industry) who offer a fixed set of content and tasks (cfr old books and assignments) to learn to pass one specific set of tasks. So although this is indeed a new approach, purely on the basis of the corporate/job specific angle, it does sound like old school pedagogy).

Concern added by Rebecca Hogue on shift employers need to pay their training
After reading this blogpost Rebecca added a relevant remark: "One issue I see with this model is that this specialized industry specific training used to be paid for by companies. It used to be that you would be hired for your general skills, and the company would pay you to be trained in the specific skills that they needed. What I see here is an opportunity for the companies to stop paying to have their employees trained in the specific skills they need, and push that cost of business to the employees themselves". ﻿
And those employees would not even be sure that they would actually be employed, even after attempting (and paying) several nanodegrees out of their own pocket. Thanks Rebecca!

Creativity and replacing more expensive workers?
From an economic point of view, there is this automation risk. Though I admit, first nanodegrees seem to have an openness towards creativity as front-end/back-end web developer come into mind, but of course not sure what is really meant by that or how open/creative this is envisioned. But there is more, once these types of courses become more mainstream, they might result in a discrimination of those who cannot afford the courses, and thus getting into a more difficult predicament.

Older workforce?
The first nanodegrees seem to target entry-level jobs, but there might be strategies being worked out for higher level jobs as well (digital skills, networked professionals). What about older workers? Is there a risk of more experienced workers being replaced by on-the-job-focused-less-expensive workers? If so, how to deal with that?

Copying societal global North as model?
And, if the jobs are provided by profit, then they are part of a chosen, institutionalized societal pattern, which always risks increasing those digital divides that already exist in that society. Additionally, it is a model coming from the global North, which means it has a colonial ring to it, and potentially transforms those norms and ways of working over onto other areas on the globe. All of us need to work for those, in jobs that are existing (yet possibly be extinct through automation soon).

Do I like the concept of nanodegrees: of course! but it is always nice to ponder, reflect and try and figure out potential pitfalls as well.
Posted by Inge (Ignatia) de Waard