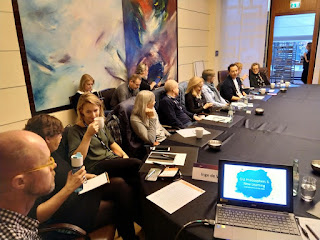 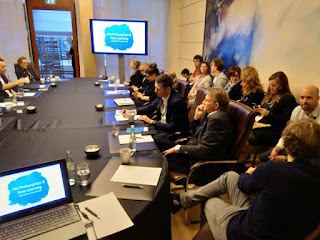 At OEB2018 the last session I lead was on the subject of AI, machine learning in combination with old philosophers and new learning.  The session drew a big group of very outspoken, intelligent people making this session a wonderful source of ideas on the subject of philosophy and AI.

As promised to the participants, I am adding my notes taken during the session. There were a lot of ideas, so my apologies if I missed any. The notes follow below, afterwards embedding the slides that preceeded the session in order to indicate where the idea for the workshop came from.

The session started of with the choices embedded in any AI, e.g. a Tesla car running into people, will he run into a grandmother or into two kids? What is the ‘best solution’… further into the session this question got additional dimensions: we as humans do not necessarily see what is best, as we do not have all the parameters, and: we could build into the car that in case of emergency, the car needs to decide that the lives of others are more important than the lives of those in the car, and as such simply crash the car into the wall, avoiding both grandmother and kids.

The developer or creator gives parameters to the AI, with machine learning embedded, the AI will start to learn from there, based on feedback from or directed to the parameters. This is in contrast with computer-based learning, where rules are given, and they are either successful or not but they are no basis for new rules to be implemented.

From a philosophical point of view, the impact of AI (including its potential bias coming from the developers or the feedback received) could be analysed using Hannah Arendt’s ‘Power of the System’, in her time this referred to the power mechanisms during WWII, but the abstract lines align with the power of the AI system.

The growth of the AI based on human algorithms does not necessarily mean that the AI will think like us. It might choose to derive different conclusions, based on priority algorithms it chooses. As such current paradigms may shift.

Throughout the ages, the focus of humankind changed depending on new developments, new thoughts, new insights into philosophy. But this means that if humans put parameters into AI, those parameters (which are seen as priority parameters) will also change over time. This means that we can see from where AI starts, but not where it is heading.

How much ‘safety stops’ are built into AI?
Can we put some kind of ‘weighing’ into the AI parameters, enabling the AI to fall back on more important or less important parameters when a risk needs to be considered?

Failure as humans can results into growth based on those failures. AI also learns from ‘failures’, but the AI learns from differences in datapoints. At present the AI only receives a message ‘this is wrong’, at that moment in time – if something is wrong – humans make a wide variety of risk considerations. In the bigger picture, one can see an analogy with Darwin’s evolutionary theory where time finds what works based on evolutionary diversity. But with AI the speed of adaptation enhances immensely.

With mechanical AI it was easier to define which parameters were right or wrong. E.g. with Go or Chess you have specific boundaries, and specific rules. Within these boundaries there are multiple options, but choosing those options is a straight path of considerations. At present humans make much more considerations for one conundrum or action that occurs. This means that there is a whole array of considerations that can also imply emotions, preferences…. When looking at philosophy you can see that there is an abundance of standpoints you can take, some even directly opposing each other (Hayek versus Dewey on democracy), and this diversity sometimes gives good solutions for both, workable solutions which can be debated as being valuable outcomes although based on different priorities, and even very different takes on a concept. The choices or arguments made in philosophy (over time) also clearly point to the power of society, technology and reigning culture at that point in time. For what is good now in one place, can be considered wrong in another place, or at another point in time.

It could benefit teachers if they were supported with AI to signal students with problems. (but of course this means that ‘care’ is one of the parameters important for society, in another society it could simply be that those students who have problems will be set aside. Either choice is valid, but it builds on other views on whether we care in a ‘supporting all’ or care in a ‘support those who can so we can move forward quicker’. It is only human emotion that makes a difference in which choice might be the ‘better’ one to choose.

AI works in the virtual world. Always. Humans make a difference between the real and the virtual world, but for the AI all is real (though virtual to us).
Asimov’s laws of robotics still apply.

Transparency is needed to enable us to see which algorithms are behind decisions, and how we – as humans – might change them if deemed necessary.

Law suits become more difficult: a group of developers can set the basis of an AI, but the machine takes it from their learning itself. The machine learns, as such the machine becomes liable if something goes wrong, but ….? (e.g. Tesla crash).

Trust in AI needs to be built over time. This also implies empathy in dialogue (e.g. sugar pill / placebo-effect in medicine, which is enhanced if the doctor or health care worker provides it with additional care and attention to the patient.
Similar, smart object dialogue took off once a feeling of attention was built into it: e.g. replies from Google home or Alexa in the realm off “Thank you” when hearing a compliment.  Currently machines fool us with faked empathy. This faked empathy also refers to the difference between feeling ‘related to’ something or being ‘attached to’ something.

Imperfections will become more important and attractive than the perfections we sometimes strive for at this moment.

AI is still defined between good and bad (ethics), and ‘improvement’ which is linked to the definition of what is ‘best’ at that time.

Societal decisions: what do we develop first – with AI? The refugee crisis or self-driving cars? This affects the parameters at the start. Compare it to some idiot savants, where high intelligence, does not necessarily implies active consciousness.

Currently some humans are already bound by AI: e.g. astronauts where the system calculates all.

And to conclude: this session ranged from the believers in AI “I cannot wait for AI to organise our society”  to those who think it is time for the next step in evolution, in the words of Jane Bozart: “Humans had their Chance”