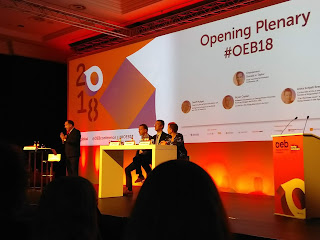 (liveblog starts after a general paragraph on the two keynotes that preceded her talk, and really her talk was really GREAT! And with fresh, relevant structure).

First of a talk on the skill sets of future workers (the new skills needed, referring to critical thinking, but not mentioning what is understood with critical thinking) and the collective intelligence (but clearly linking it to big data not small data, as well described in an article by Stella Lee).

Self-worth idea for the philosophy session, refer tot he Google map approach where small companies who offer one particular aspect of what it took to build google maps were bought by Google, and as such producing something that was bigger than the sum of its parts). But this of course means that the identity and the self-versus-the-other becomes under pressure, as people that really make a difference at some point, do not have the satisfying moment to think they are on top of the world (you can no longer show off your quality easily… for there are so many others just like you… as you can see when you read the news, follow people online…). While feeling important was easier, or possible in a ‘smaller’ world, where the local tech person was revered for her or his knowledge. So, in some way we are loosing the feeling of being special based on what we do. Additionally, if AI enters more of the working world, how do we ensure that work will be there for everyone, as work is also a way to ‘feel’ self-worth. I think keeping self-worth will be an increasing challenge in the connected, and AI supported world. As a self-test, simply think of yourself, and wanting to be invited to be on a stage… it is a simple yet possibly mentally alarming aspect. Our society is promoting ‘being the best’ at something, or having the most ‘likes’, what can we do to install or keep self-worth?
Than a speaker on the promise of online education, referring to MOOCs versus formal education, the increase of young people going to college… which strangely contradicts what the most profiles of future jobs seems to be like (professions that are rather labour intensive). The speaker Kaplan managed to knock down people who get into good jobs based on non-traditional schooling (obviously, my eye-brows went up, and I am sure there are more of us in the audience pondering which conservative thinking label can be put on that type of scolding stereotype speech, protecting the norm, he is clearly not even a non-conformist).
Here a person in the line of my interest takes the stage: Anita  Schjoll Brede. Anita founded an AI company Iris.ai , and tries to simplify the AI, machine learning and data science for easier implementation. So… of interest.

Learning how to learn sets us human beings apart. We are in the era where machines will learn, based on how we learn… inevitably changing what we need to learn.
She gives what AI is seen by most people, and where that model is not really correct.
Machine learning is based on the workings of a human brain. Over time the machine will adapt based on the data, and it will learn new skills. It is a great model to see the difference. One caveat, we still not sure how the human mind really works.
If we think of AI, we think of software, hardware, data … but our brains are slightly different and our human brains are also flawed. We want to build machines that are complementary to the human brain.

Iris.ai started with the idea that there are papers and new research published every day, humans can no longer read all. Iris.ai goes through the science and the literature process is relatively automated. The process is currently possible with a time decrease of 80%. Next step is hypothesis extraction, than build a truth tree of the document based on scientific arguments. Once you have the truth trees are done, link that to a lab or specific topic, … with an option of the machine learning results leading to different types of research. Human beings will still do the deeper understanding.

Another example is one tutor per child. Imagine that there is one tutor for that child, which grows with that child, helps with lifelong learning. The system will know you so well, that it will know how to motivate you, or get you forward. It might also have filters to identify discriminatory feelings or actions (remark of myself: but I do wonder, if this is the case, then isn’t this limiting the freedom of saying what you want and being the person you want to be… it might risk becoming extreme in either way of the doctrine system).
Refers to the Watson Lawyer AI, which makes that the junior lawyers will no longer do all the groundwork. So the new employees will have to learn other stuff, and be integrated differently. But this relates to critical ideas of course, as you must choose for employing people (but make yourself less competitive) or you only higher senior lawyers (remark of myself: but than you loose diversity and workforce).
Refers to doctors built by machine learning, used in sub-Saharan settings, to analyse human blood for malaria. Which saves time for the doctors, health care workers… but evidently, this has an impact on the health care worker jobs.
Cognitive bias codex (brain picture with lots of links). Lady in the red dress experiment.

Her take on what we need to learn:
Critical thinking,  refers to source criticism she learned during her schooling.
Who builds the AI, lets say Google will transgress the first general AI… their business model will still get us to buy more soap.
Complex problem solving: we need to hold this uncertainty and have that understanding. To understand why machines were lead to specific choices.
Creativity: machines can be creative, we can learn this. Rehashing what is done, and making it to something of your own is something that is (refers to lawyer commercial that was built by AI based on hours of legal commercials).
Empathy: is at the core of human capabilities like this. Machines are currently doing things, but not yet empathic. But empathy is also important to build machines that can result in positive evolutions for humans. If we can support machines that will be able to love the world, including humans.