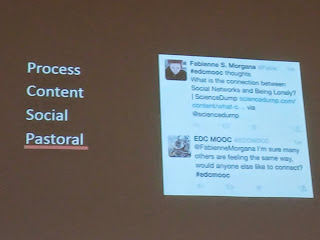 Great keynote by Siän Bayne who is professor of digital education at the University of Edinburgh, UK, on teacherbot, a twitterbot used within an educational mooc. Really interesting from the automation point and social effect on the debate.
Sian provides multiple references, so where possible I mention the author and year of the reference in this liveblog. Hot from the press Times Higher Ed article on Teacherbot here.

The electronic tutor is going to spread across the planet as wiftly as the transistor radio … pure technocentriciy (1980)
By 2011 – Underwood and Luckin: AI in education are still not very well known about, not very well used, because we have not understood why to use them or how to use them.
So there is a body of research which critiques this automated tutor.
Feenberg, 2003: the goal is to replace fac-to-face teaching by professional faculty with an industrial product, infinitly reproducible at decreasing unit cost – critique.

This has attracted a lot of funding opportunities, again it is very political.

Who is thinking against this? Neil Selwyn has written many books describing the neo-liberal, capitalist lines of this automated vision.

How can we respond to this automation function?
Critical pedagogy approach would bring the focus back to the correlation with students and tutors (Clegg, 2003).
Humans, academics and teachers working together.
Mobilization in defense of the human touch (Feenberg, 2003)

2 the people t/technology divide
Two choices provided by Hamilton and Friesen, 2013
Instrumentalism: technologies are seen as neutral means employed for ends determined independitly by their users.
Essentialism: technology has its own trajectory, humans need to adapt, like a Newtonian god, watche unaffected as the drama unfolds.

This is something we must think about critically to move forward.
Things and people need to learn to join – (Fenwick, Edwards and Sawchuck, 2011) focusing on the world and the dynamics in them.
Whatmore, 2004: the human is always evolving and adapting to tech, we (tech and human) make each other.

3 twitterbots as a cultural form
Twitterbots tweet on their own without any human action. 8,5 % tweets are deliverd by twitterbots.
So it is an interesting, contemporative social form. Here are some examples.
Example: ‘dear assistant’ made by amit agarwal, or LA quakebot made by bill snitzer, Olivia taters made by rob dubbin, desire bot made by felix jung,
Bots of conviction: they can be all sorts of functions, with this bot being political. NRA Tally made by Mark Sample, two headlines made by darius kazemi.

Rob dubbin wants to demystify what happens in the world through critical twitterbots.

4 teacherbot in the EDCMOOC
This bot wants to do some critical work on the boundaries of teacher and technology.
Teacherbot ran from October/November 2014 in Coursera mooc (12000 enrollments).
50% of enrollers work in education, so should be perceptive to this critical teacherbot.

#edcmooc : based on a simple GUI : mostly topics were process, content, social and pastoral related (see example in picture)
Challenge was to make a teacherbot that was part of the curriculum. So now the answers of the bot were fed content from the course.

Serious lessons: we never intended to trick the learners into thinking it was human. Everyone knew.
Teacherbot got into a dark loop at first, with a fatalistic tweet, but then things settled down.
The bot was actually very dominantly present in the twitter stream (about 25% of the tweets)
But it got extra discussions and reflections going (ambush teaching)

5 Rethinking teacher automation
Deficit => excess: based on teacher numbers. The teacherbot helped with creating excess.
Supercession => entanglement: if we do automation right/wrong it will affect teachers. The question was to find what the interest would be for education as complimentary extra’s.
Embrace/resistance => play
What works => what do we want?