Our iPhone for Moodle web application aks for your feedback 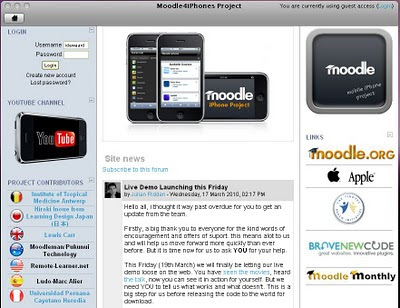 Today we have opened the demo site of the iPhone Moodle site I talked about in previous posts.

Feel free to have a look at http://iphone.moodle.com.au/ and share your remarks on one of the fora. The only thing you need to do to get access to the fora is to register (for free).

Thank you for your willingness to have a look and exchange your ideas with us. Once we go through all remarks, and we incorporate them in the existing code, the code will be released.

How the project come about

Just a quick narrative of how the project came about.

Tackle what you know will be a benefit

This project came about by accident. It was never our attention to develop a Moodle/iPhone/iPod solution from the start. Actually, we were just happy working on a continued medical education for HCWs that previously did not have access to updated learning material. But as we got feedback from the HCWs in the field, we saw the need to adapt Moodle to enable complete access for the iPhone. The iPhone did work with the MLE, but it did not allow access to all the interactive features of Moodle. So we only took action as it had a clear purpose that could benefit our learner target group.

Standing on the shoulders of giants
The coding got developed by looking at what was already there, and thinking about what would be relevant to have.

Trust the world and its communities
Whenever we were confronted with a problem, it was posted on one of the mobile Moodle forums, so everyone could think collaboratively. An open community that can give support while developing any type of application is a strong benefit for any endeavor.