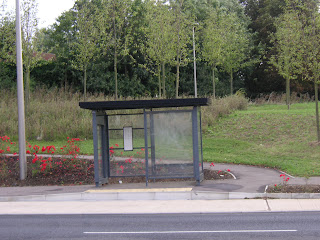 The world can be a tough place. As I walk from the open university to the bus stop I pass by a park. It is a big park with an estate in it harboring big houses. At the end of that park, near the bus stop there is a small playground. As spring is here the park is filled with daffodils and other blossoming trees. Before I reach the bus stop I need to go through a tunnel, underneath a busy lane separating two estates. That tunnel takes me to another part of town which is known as a poverty struck area. Kids from that area cross the tunnel as well, to play in the playground at the other side of that imaginary financial fence.
Last week I saw a group of kids playing, while two of them stood a bit further. A small girl - age 5 or 6 - was standing near the playground with her older brother. She was facing the tunnel. They had an argument. "Go back! We're not goin' home yet," said the brother, pointing her to the playground. The girl kept moving slowly towards the tunnel, nearer to home. The brother got mad and shouted at her. The small girl stood her ground, holding her shoes in her hands.
It was a strange sight, I wondered about the shoes.
The argument kept going, and as I reached them, the girl saw me in the corner of her eye. The girl decided she would go home, even if she had to do it on her own. She started walking in parallel with me, heading towards the tunnel. Her brother was reluctantly staying. Then the little girl turned around, shouting at him: "because I do not want to get raped!".
I could not believe my ears. That girl was much to young to have this fear. She should not have to worry about it. Automatically the shoes in her hand got a strange meaning. I turned my head around, looking at the playground where the other kids - 12 to 15 years - were still playing football or simply hanging out. They just kept on playing, no parents in sight, no older people. I slowed down my pace, and walked in parallel with the girl. The brother caught up with us once we were at the other side of the tunnel. They went home I guess.
It was an eerie feeling. It brought a memory back to mind. Me being about 8 or 9, surrounded by older boys in a park, one of which shouted: "let's rape her!". In my case it was a small park. I went to play there with my best mate Koen and we lived only a block away. The boys had threatened me and Koen. Koen - being a boy - managed to run off, shouting he would fetch help. As I stood there I clearly felt threatened and as a kid I did not know what to do. Luckily Koen came over before anything bad happened. Koen had encountered his dad coming back from work right at that time. His dad was in the army, a sergeant. He was still in uniform. As he came running to us, some of the kids ran off. But the ringleader stayed. The father gave him a stern talk, said he knew where he lived and would talk to his parents. The kid was clearly not impressed. I was escorted home. Koen and me were both pale and silent.

Yesterday, I took the bus from the same bus stop. A mom and her little son got on it as well. The boy aged about 7. They sat down right behind me. As the bus filled with other people, the mom talked to her son.
"I need to work longer hours now, to earn more money."
"Do we need to move to another house again?" the boy asked with his high pitched young voice.
"No, not if I work longer hours. But I want you to learn to take the bus home alone."
"But I don't want to."
"You are becoming a big boy now, you will manage" said the mother. But her tone of voice gave away her own uncertainty.
As the bus drove some teenagers got on the bus as well. They were jolly due to the good weather. At a certain moment a teenage girl screamed. A wasp had gotten in the bus and was circling around her. Her fellow schoolmates laughed and yelled as the wasp flew from one to the other. The anxiety of the wasp got some girls to swear. That got the mom behind me slightly worried.
"Cover your ears" she said to her little boy.
"Why?"
"Because they are using bad words"
The mom wanted to protect her son, even from those harmless, harsh words... she wanted to safeguard him, but life sometimes does not provide the condition to watch over them all the time, not when money is hard to come by.
The world can be a tough place.
Posted by Inge (Ignatia) de Waard