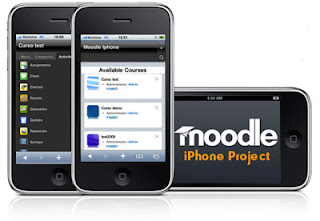 It has been more than 2 years since the Moodle4iPhone project http://iphone.moodle.com.au. Unfortunately it was not ready to be officially released, but after additional work from Beto, Carlos and Ludo, the official release will be rolled out in the following weeks.

For all of those interested, we kindly request you to go to http://m.ideas4ict.com/ and enroll to the course and give us some feedback (at the social forum http://m.ideas4ict.com/mod/forum/view.php?id=4) in order to improve this theme before to make it public for the whole Moodle Community.
Two themes will be released, 1 for mobile devices and the second one for tablets.

The timing towards the official release is as followed: try-out and feedback in the next two weeks. Than one week of tweaking based on the feedback received and ... release! So, for all of you interested in mobile Moodle, get your devices out and join the community to get this project launched.