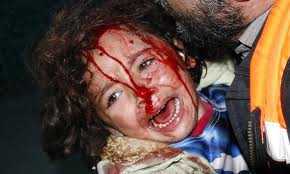 These last few days were pushing the truth into my face again: education does not change the world. In fact: it helps destroying it. So why bother? Why do I put so much time and effort in researching education?

It is not about Israël, it could just as easily be North Korea, China, Zimbabwe, waffles baking Belgium, … or the tiny country of Andorra for all I care. It is any region empowered by the educated that decides ‘the other’ should be destroyed (read murdered under a false flag of well-meant excuses). It is never about a nation or patriotism, those are just words used by the educated to feed propaganda, the media and lead up to destructive action. The nations never die, its citizens die, the children die. The powerful, educated few that decide they will bombard innocent people … they live. They are educated in surviving, constructing mind weaves to make them and others think violence is permitted, they understand how to fire guns pointed away from their homes.

Universal rights are simple: you kill someone on purpose => you are a murderer and should be trialed.

Annihilating the powerless is the best way to keep people down. Annihilating the powerless and educating the thinking. Give those that have some intelligence something to do. Give them the illusion their education will make the world a better place. It will never do it. Power is not in education, power is in the elite network, the willingness to be part of the network, the willingness to engage in destruction to keep power to those already in it: “for that is how it should be. We know what is best for them”.

Palestinians are educated people, israëlis are moslims too, jews struggle for peace and all of us suffer from death and destruction. Killing someone makes anyone a murderer, even if they do it from 10 miles further down the road. That is basic knowledge we all know. But it does not matter that we know it. There is no world for the peaceful, for the balanced, for indigenous people, for any of us just wanting to live in harmony.

Delivering primary education to all?! I think not. Reaching the millennium goals is a nice sounding motto. Something to keep many of us busy, working, researching. But unless the few really want to achieve it, it never happens. And it does not happen. We could. Social science has many frameworks, theories, even pilot studies to prove its potential realization. But it does not happen. Because rebuilding cities, rolling out roads for tanks, pumping fuel from the core of the earth to regions consuming it in a rush to go to work, to professions that put all of us between brick walls for the biggest part of our day, for workers hurrying of to any space that is not their family so they do not have to talk to their fellow man/woman, even if those are their partners, their next of kin, their spouse. Let alone make them think about easy dilemma’s that might make a change.

What gets us on the streets? I don’t know. But I can tell you what does not get all of us walking the pavements, hammering on doors of our so called democratic elected leaders: technologically strong, educated  armies blowing children to oblivion.

Education is manipulated and misused. Maybe it is just there to keep us busy, to keep me busy. But for the life of me I cannot come up with anything else to try and change this world and hope that at some point we will find a cure for mindless aggression in name of the father, the nation, the god… or any of those iconic lies.
Posted by Inge (Ignatia) de Waard