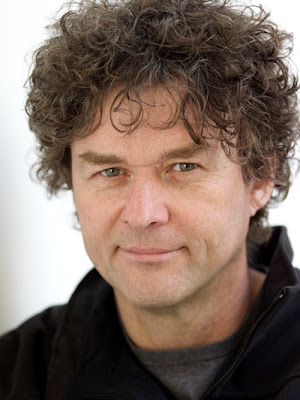 Gunnar is a curly person with glasses, who just gives an AMAZING presentation!! Please if you can, look this research up! It is so strongly build (sustainable, new, well-thought throug). Just amazing!

Mostly working with digital media, on the textual level (the individual digital text and the new genres of new media). So they try to experiment with new media's. Normally the social science follows the hard science, but then they are not the constructors of the media. this is why they want to put the things together, construct the technologies upfront. They want to come up with new media and then suggest certain devices to employ and exploit built upon their media criteria.
they used: GPS, sensors for movements, compass
working with AOS (Apple), but they also want to go with android platform. They focus on 3D, thinking about this as a prototype genre that does not yet exist.

With this augmented reality, they wanted to show the parthenon and overlay information to give a complete, comprehensive experience of the Parthenon. The mobility and the movement of the perspective also give extra value.
In May they made a prototype from the Roman Forum (e.g. Caesar's temple where you can access the classical text). they also created a feature where students and teachers can add their own links or texts. the teacher can host their presentation in relation to its context (WAW, GREAT). And the students can post their assignments. As such the AR environment will work as a memory chamber of stuff you want to learn about.

They did not only want to display the temples, but also give a simulations of the events leading up to the temple of Augustus. The different events that lead to the building of the temple, are all open for the learner to explore, e.g. Marcus Antonius giving a speech. There is multimedia content, text, links... yes, full and useful (sorry, but I am enthusiastic! this is augmented learning with a vengeance!).

Testing and evaluation: tested with 3rd and 10th graders, the whole system was intuitive and easy to use. Two similar test groups. in February 2010 with Parthenon with classical students, they said that the mobile should not be 'competing' with the real objects. These same students were used for testing the Julius Caesar temple, they were enthusiastic and liked the fact that they could add their own comments and the dramatic features, but again they said this should not replace the real academic professor, but that it could compliment him/her.
this will be made available to the Apple marketplace as an application for adult users.

Abstract as described in the proceedings of the conference
We here describe experiments with a potential mobile augmented reality genre for learning, a so-called 'situated simulation' (sitsim).
Several prototypes and their key features and functionalities are presented and discussed as they have evolved over several years of design and development work. A particular focus is on the use of sequences of events and actions in the virtual environment.
This opens up for new kinds of story lines and narrative structures, which are then described and discussed in relation to narrative theory. Finally, design features for further research and development are suggested.

CONCLUSION – FURTHER DESIGN AND DEVELOPMENT (as put forward in the proceedings of the conference)
The development of the sitsim genre prototype is conducted in the context of digital genre design. An overarching approach to this endeavour is to develop a method for how to create innovative communicative and expressive forms based on emerging digital technologies, such as mobile augmented reality on regular smartphones. Feedback from the user testing shows that we are on the right track. The purpose now is to make the sitsims available to larger user groups, for example via Apple's App store for free download. This will hopefully generate more feedback so that we, the developers can explore the potential of this 'genre' further. In future versions of the Temple of Divus Iulius sitsim we also plan to include different interpretations of both objects and events. The current version of the Temple is Corinthian and based on german scholar Christian Hülsen's interpretation, but the temple might have been of the composite style. Descriptions of the events surrounding Marc Anthony's speech also differ, depending on which classical source one read, Appian, Suetonius, Dio or Plutarch. In the current version we used Shakespeare's interpretation from his tragedy Julius Caesar, which was again based on Plutarch's account. To be able to switch between alternative interpretations of historical data/accounts will add a valuable dimension to the application Learning is contextual. It is a function of the activity and culture in which it occurs. Lave and Wenger (1991) call this pedagogical approach “situated learning.” In situated learning the contextual space and place are central. With mobile augmented reality and situated simulations it is possible to support and extend the “situatedness” of learning and education in new ways by means of information technologies (IT). This is not limited to historical topics as described above. It extends to any discipline or subject matter that may benefit from making present what is absent, be it past, current, or future topics.
The combination of the real and the virtual (what is simulated) also provides added experience and value. It gives the learner information from multiple sources—what Gregory Bateson in his epistemology has deemed “double description.” (Bateson 1988) In his view, the combination of two sources of information generates a new type of knowledge and experience, as is the case with binocular vision (of depth). The notion of double description has been an important perspective in combining the virtual and the real when designing the sitsims presented here, and we believe it has a great potential for future solutions.
Posted by Inge (Ignatia) de Waard