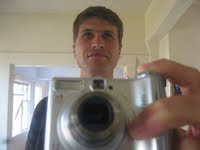 Some researchers seem to have a natural savoir vivre to get idealism and research out there for all to enjoy. Steve Vosloo is such a researcher, a mobile learning researcher into critical research.

If you have the time to read any of his papers, you will see that his research reports satisfy your scientific mind with his great theoretical drive. But what I love above all is that his work and initiatives add an incredible human surplus.
It is never only about mobile learning initiatives in theory, he makes a difference. He breaks down cultural barriers, he finds learning solutions with the most basic of communication devices (low cost cell-phones)… he is the type of researcher I would love to be (I try to be, but it is a far way to go). Let me describe his latest big project: Kontax, with which he helps massive amounts of youth learners to improve their literacy skills via low-cost phones.

Kontax is a project that uses mobile phones for literacy, which is supported by the Shuttleworth foundation.

On 30 September 2009 Kontax – an m-novel created for the Shuttleworth Foundation’s m4Lit project– launches in South Africa, making world history as the first of its kind to be offered in both English and isiXhosa. The m4Lit project, led by Steve Vosloo, 21st Century Learning Fellow for the Shuttleworth Foundation, aims to not only explore the potential for increased reading and writing for 21st century teens through mobile phones, but also to introduce a more interactive style of story writing and publishing that holds appeal to the participatory culture of youth. The hope behind the m4Lit project is that by researching the role of cellphones in teen reading and writing, educationalists and publishers can better understand the opportunities and risk for literacy practices presented by the most popular communication device used by any teen today.

The project ran in pilot phase from August – December 2009 and it is ongoing.
• From 30 September 2009 onwards a new chapter from Kontax was released every day.
• Each chapter is about 400 words long.

The full press release on the project can be found here.

And for those willing to take a look at the reports on the m4lit (mobile for literature) or Kontax project check out these research reports here.

Steve is not only a great researcher, he is also a very kind person in real life. I met him in the past and he has charisma and vision. So, if you have the chance to meet him, do it, he inspires.