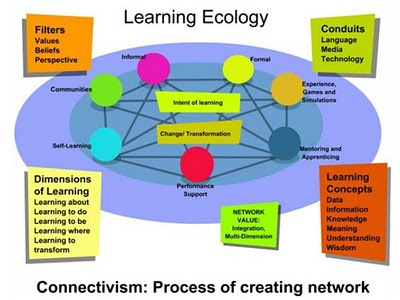 In 2008 I enrolled in the CCK connectivism course. It was the first time I took such a mass course and … I liked it, though I could not really say why I liked it. In 2009 I wanted to follow the second run through of the course, but due to time restraints (buying a house, taking a master, full-time job) I just could not cope and so the intention stayed just that.

Then, as I was meeting people at a time that George Siemens’ and Stephen Downes’ course got more attention from the eLearning group, I heard more critique on the course and specifically on connectivism. What was surprising was that many of the people who critiqued it, actually were experienced researchers, yet they did not actually follow the course itself. On top of the fact that they did not follow it, or only took a very brief glance at the concept, they critiqued the fact that George and Stephen came away with the idea of connectivism, because people were blindly following their concept, as though the people that took the CCK-course were not able to think for themselves.

Another critique I heard was that the CCK-format was contradictory to the concept of connectivism. Other people I met did not like the fact that connectivism was put forward as a new learning theory, telling me that a theory can only be called just that once the scientist is much older and the theory has been critiqued by all peer scientists. Well okay, this might sometimes be the truth, but in this case I tend to argue: Connectivism is a concept that fits contemporary learning; contemporary learning moves forward at an increasing speed, thus a theory can be put forward much quicker and be critiqued by the people following it (not only the ivory tower people, wherever they are). Whether or not it is a ‘lasting’ theory really is of no interest to me. Thanks to the idea that this could be a theory, things started happening, people started learning, networking, and collaborating. At this point in time, with these educational technologies, it works so: voilà.

Why do I like the connectivism and especially CCK-course? If you want to read up on it, lookie here and here.
I have multiple reasons to like the course and its concept:

So, am I a blind follower of the George and Stephen train? No.
Do I like what they do with connectivism concept and the CCK-course: yes.
Why? Because learning as they enable it, is the learning that I have been doing for my entire life. This learning, connecting with people who’s voices I like, who’s thoughts add to my deeper understanding, and who’s ideas reach beyond the separation of disciplines, regions and cultures appeals to me.

There is also another extra. Through the connectivism course, I could get into contact with people that have a profound knowledge in a topic, but are not necessarily part of the academic powers. Meaning that although they might have great ideas, the chance that I would encounter them as authors of research papers might be much less possible. In saying this, I belief that the CCK principle also enables people from less connected power regions, to become part of the content narrative. And maybe, this fact of enabling content creation outside the fixed academic power bastions is what pisses off some of the academics that critique Connectivism. In my mind CCK is linked to Critical Social Science, which I wrote a couple of weeks ago.

To me connectivism is very natural organic learning. It brings us back to the open and active baby stage of learning. Within the first 18 months of our childhood our capacity to learn is formed. Nevertheless no one tells us how this learning happens. As a baby and toddler we just pick-up on things from our context, from the people we come in contact with. As a toddler we explore, we feed it back to our peers (parents, people around, other toddlers) and we take into account the reactions we get (“oh, is not she clever” or what I got “she is a strange kid, but okay”). And please do not be fooled, the CCK learners have far more in-depth knowledge to share then babies, they just love active learning as much as any new born and ... they are open to learning!

Learning is all about networking, exchanging ideas, searching for what fits my learning, my goals and as such connectivism helps me what type of learning works for me.
Posted by Inge (Ignatia) de Waard