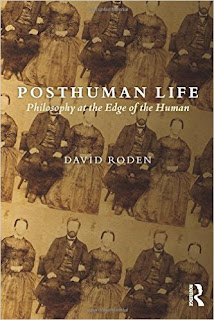 Critical posthumansim and speculative posthumanism
Critical posthumanism rejects the anthropocentrism of modern philosophy and intellectual life
Speculative posthumanism opposes human-centric thinking about the long-run implications of modern technology
Sampling the diversity of posthumanism: Derida (the subject of human – writing – is part of the world). Every subject is connected or related to the system, never simple source of agency, it involves other agencies.
Human as it stands in our subjective or real world. According to Harmon the big aberration of modern western philosophy is to be focusing on the relation of the human being in the world. So our idea of the world is the world as seen by a human subject, as such it is reduced to a single object.
So where are we if we think of the world as not a human given world?
Refers to How we became post-human: the impact of modern cybernetics and post-war sci-Fi and our conception of the human (Katherine Hayles). The human subject is never autonomous of the rest of the environment, and very politically narrow view of the human subject.
James Ladyman and John Ross: philosophical naturalism if we want to find out about the world, we need to investigate the world empirically. Questioning the centrality of the human subject.
David is interested in what comes after the human, the post-human? Wide descendants of current humans could cease to be human by virtue of a history of technological alteration. Speculative posthumanism.

With wide descendants of humans, David means that we cannot make a simplistic distinction between biological humans and non-biological humans. All of these are part of the total environment, so in a sense one could say that a socio-technical network can also be seen as human (e.g. a ship, for it is build and used in a wider sense by humans).  Post-human succession would be more than human, the wide human is an assemblage of both narrowly and widely human. This means that the disconnection thesis something becomes human when it has ceased to belong to the wide human as a result of a technical alteration. Or if it is a wide human descendant of a posthuman. So as soon as a robot can act autonomously from a human, it becomes a disconnect from the wide human.
To take home: how does this relate to resilience. The ecological resilience is being able to adapt to changes in the environment. Adapt to contingencies as they arise. Anything that is a posthuman has got to be an agent of some kind. Our moral concern is that something that we make can discover their own morals, their own values. Ecological resilience is a form of autonomous adaptation, sometimes in cooperation with other entities.  From an ethics points of view, it can be that resilience leads to hypermodernity that is continues functionally augmented, changing. This means we need to qualify the concept of resilience, otherwise we do not know what we are committing ourselves to from a posthuman perspective. This means there is something problematic to resilience and posthuman… but no answer yet.

Question: relationship between ethics and resilience: you could say tuberculosis is resilient as it adapts, similar computer virus that sustains itself could be resilience. In what circumstances is resilience good or bad, and how can we link this to a human point of view? Answer: at a theoretical level it is not possible to do this. The only way to see what is bad or good, would be to actually make it… which also means that responsibility and accountability comes into the equation. This also applies to other resilient options we are making.

Question: educational and psychological resilience can be varied, but there is a similarity to the term (resilience) is used, I am wondering if looking at other definitions of perspectives can be helpful. But how can we look from a non-human perspective, as we are humans? Answer: yes, resilience is a posthuman notion in which no entity is privileged, and we need to take all of these into consideration. ( no answer to second part of question)

Question: focus on technology and environment, but can contemporary concerns can also be linked to the past, the spiritual dimension and the supernatural dimension. That seems to me as non-human. Is this different, or are we in a different phase? Answer: one of the follow-up of melomancer, uses voodoo, so maybe there is a cross-over between posthuman discourse and the spiritual realm. We are surrounded by software entities that are making decisions autonomously from us, so in a way it is happening, and we do not know what the effect is on our environment.

Other ideas: systems thinking in all these cases, triage affecting reactions in terms of emergencies. A system that keeps itself in a working condition, these systems can only be maintained of all elements are kept active.
Posted by Inge (Ignatia) de Waard

eBook (is being updated)