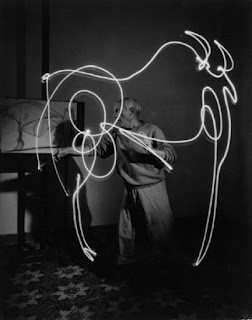 There is so much power in Learning. In the ongoing quest for creation, trial, error, and renewal. There is something mystic in those of us who keep on creating (learning) and exploring the new on top of the old. Heightened creativity inevitably leads to estrangement, and at the same time getting closer to pure understanding. Going out of every comfort zone, building on the immense knowledge and experience one has gathered during a lifetime, and then mold it into what only the minds eye can see, beyond the known. The learning process, in its full power leads to unknown territories, it makes us want to do, want to keep doing it, until the end of time.

The first time I saw personal, power learning, was when I was at a Picasso exposition in Spain. My mother has introduced me to Picasso's work early in life (we went to his atelier in Antibes, as we stayed nearby during our summer vacations), but I did not really feel related to much of his work (some exceptions). But then, in the attic part of the exposition, there were these seemingly endless erratic drawings of bulls.... just chaotic drawings. Again and again, trying to depict the perfect multiple viewpoints of a bull in a two-dimensional piece of paper. As I moved slowly passed these drawings (and at first with little interest) ... I suddenly was drawn into them. So I stopped. And started to look again. There it was. The master at work, for himself, by himself, relentlessly seeking something, sketching viewpoint upon viewpoint (those drawings were made at the end of his life). It suddenly became clear that this was not a drawing, this was a man at work. Dedicated to finding something, following a quest. For this to happen, fame, artistry... all of that was not necessary. Simply a dedication to a topic, for decades. Trying to find a clue in detail, that would explain the bigger picture. Power Learners seem to move beyond themselves, could it be said that they become the medium? Is there such a threshold, from where the personal learning journey for enrichment suddenly turns into the medium itself? Many artists have said at certain points that some work gave them the feeling of being more then themselves. They became the object of something invisible.

Power Learners have to keep creating: carpentry, engineering, programming, sculpting, writing, thinking, ... and of course making music. David Bowie seems to have done that, learning, power learning, and then moving beyond the sum of his learning. What a thrill that must be. Starting from a passion, and then becoming it. (picture: http://sloannota.com/blog/drawing-and-writing-with-light-2/ )