Tomi Ahonen: Mobile in Learning: lessons from around the world 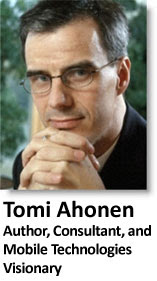 Tomi Ahonen comes in with a gray mob-reminding hat and starts with a joke on the age of a mobile learner based on sms-capacity.

What was his speech about: mobile phones are the most prevalent technology, ever. 4,6 billion people have a phone. There are more phone users, than there are people having access to running water (Inge thought: telecom companies in low resource areas might put some of their profits into running or clean water projects - if they are not already doing it).
More kids have their own personal cellphone, than they have their own personal books (Inge: sad fact... except if you think about the Kontax-project lead by Steve Vosloo which increases literacy in young adults by the use of cellphones). Sms is much faster than e-mail. 10% of youth feel perfectly relaxed with sending sms messages while having sex (UK research). Underground trolleys and buses use sms to buy tickets, paid parking with sms, tax return via sms in Estonia, Estonia will do the national election via sms, m-stamps for snail-mail (alphanumeric codes - in Germany - accessible 24 hours a day). 68% of teens said their favorite way to communicate via SMS. texting underneath the sleeve: teenagers give their old not connected phones. The future is not only mobile, it will be ubiquitous with various devices, but mobile will be the preferred device of youngsters. India has 90% coverage via WAP enabled phones. Ringtones are 5 billion dollar business, no other technology had use for ringtones => new businesses start up. 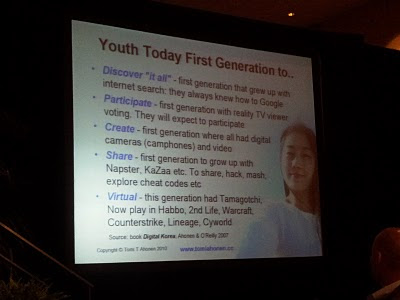 This creates a complete different generation, one that all previous generations can not imagine how it shapes the lives of contemporary young generations. Permanent connections and almost telepathic communications will reshape the world that we live it, that THEY will build.

When did mLearning start? In Japan in 2000. The first school implementation was in Singapore in 2001. Mobile exams first appeared (according to Tomi) was in New Zealand 2003. The first daycare mobile blog dates from 2006 in Finland. Mobile books take Japan since 2007. 58% of Kenya uses mobile banking for personal financial transactions. QRcodes and other mobile coupons for discount rates. Poland: free cooking advice from Knorr via mobile. AMF Ventures saw that mobile data is much more accurate in measuring data. Smirnoff bartender app. 5th most popular mobile category in Korea is Learning for user generated content (26%). Voice to voice translator apps. Mobile love detector (voice tension gives you love results). Game with "Mosquito Noises" in UK from MobHappy 2 december 2008 (by Fanta).

Mobile is the 7th mass media. But new media will not kill previous media, it only has new benefits, uses (look at the picture below). A nice mobile app: Carbon Diem to look at your carbon footprint. 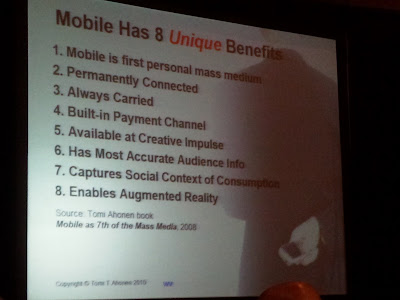 Or from the program: Mobile is the most prevalent technology on the planet, exceeding TV by a factor of 3 to 1 and personal computers by 4 to 1. Being digital and interactive, mobile is well suited for uses in education. Called the seventh mass medium in the industrialized world, in the Emerging World mobile is often called the "first mass medium" and services such as internet access will be primarily from mobile phones, not PCs. This opening keynote presentation examines the consumer use of phones and the uses of mobile in education and learning. Case studies from different parts of the world will illustrate how the exponential growth of mobile technologies impacts the way we live, work, and learn.
Posted by Inge (Ignatia) de Waard