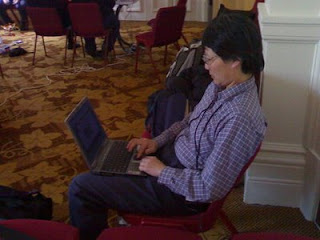 It was a chaotic couple of weeks in which I learned a lot, and now it is time to send it in to cyberspace.

During mLearn08 there were a lot of inspiring speakers and because of the parallel sessions I could not see all of them, but I would like to share the one's I found inspiring.

Selena Chan (photo by Alexander Hayes) who works at Christchurch Polytechnic Institute of Technology in New Zealand gave a presentation entitled "evaluation of a m-Learning pilot - narratives of workplace skill acquisition using mobile phones". This session was inspiring because her learners were bakery apprentices (so not your average mobile learning crowd, yet a very eager set of learners).

Selena is an energetic, but in non-verbal attitude a bit shy speaker. Working on a phd on tracking identity formation.

What really blew my mind was the fact that her apprentices choose their own mobile social media AND that they were not eager to learn in a classical style before they took up this apprentice role at the workplace. So this mobile learning really went into the real student-centered learning cycle as the learners choose what software apps to use and what to put on them and the learners learned without being the enthusiastic classical learners (yes, respect).

Why did they use mobiles as learning devices: they did not have access to computers (the apprentices), but all of them had mobile phones. Ten units standards are used.
Allow students to collect evidence for their work and put this in their m-portfolio.

This educational institute really got into social mobile media as well! An amazing set of tools, that are screened for their usefulness by the institute.
The great thing is also that the apprentice could suggest their own mobile apps. For example:

Multiply for audio (remark for myself: get into this a bit closer)
COMIQ is the favorite of the apprentices for this specific application (just take a look it is GREAT for k12 students... and I :-)

evaluation of the project

An apprentice got 50 dollars if they participated in a trial.
They followed the activity theory framework.

Selena is also a blogger, if you are interested in a presentation she gave on this topic as a keynote speaker in 2007, look at this pdf.

How she came to this project is explained in this blip.tv video in which Stephen Parker interviewed Selena.